A few weeks have passed since Bayern celebrated it’s title victory in the German championship, the Bundesliga. In case you didn’t know, that win makes it eighth time in a row. An outstanding achievement on one hand, but a disaster for German football in general. Only seven years ago, the Bundesliga and the German National Football Team were on a high and seemed unstoppable. Bayern scooped the Champions League trophy in 2012/2013 singling the beginning of their dominance. One year later and it was the national team who were celebrating with Germany winning the 2014 World Cup. Things could not have looked better for German football which was expected to go on to dominate for years to come both from a club and national perspective. But it never happened and instead the level of German football started to decline.

Bayern as a team is already hated by most football fans. During my studies in Germany, I was amazed how many people even in the Bavaria region stopped supporting the team. As fan of Bayern, I was mostly shocked and disappointed. However, the more you talk to football fans, the more you understand the reason. Other clubs don’t have that amount of fame, the same amount of money and mostly important the same respect as Bayern. indeed the general feeling is that certain individuals at Bayern including the president of Bayern often don’t not show the same level as respect to other teams as afforded to Bayern. Former President Uli Hoeness regularly threw out phrases like “Bayer (Leverkusen) will not get ahead of Bayern after 100 years” which didn’t help the situation.

The endless victories of Bayern has led to the reality that the rival clubs have begun to gradually lose interest in competing for the title with the gaps growing every season. even Bayern has stopped talking about what will happen in the Championship instead focusing more on attaining Champions League success. If Josep Guardiola was still trying to make a revolution in Munich in football terms, then Carlo Ancelotti simply exploited what he received. And he still won the league with ease.

What about other clubs

Despite the domination of Bayern, there have been some promising signs that clubs are beginning to believe that things are about to change. In the Bundesliga,  competition from other clubs seems to be higher than before with more teams pushing Bayern in the title race. Nearest rivals Borussia Dortmund are gradually improving and closing the gap season over season whilst also regularly competing in the Champions Leagues. Bayer Leverkusen are also doing very well, improving its domestic form and taking part in more frequently in European cup competitions. Other teams are in the mix as well with RB Leipzig and Borussia Monchengladbach offering new threats to Bayerns domestic dominance. Indeed the gap is shrinking with the difference in points between the second club in the Bundesliga and the fifth is only 2 or 3 point on average. 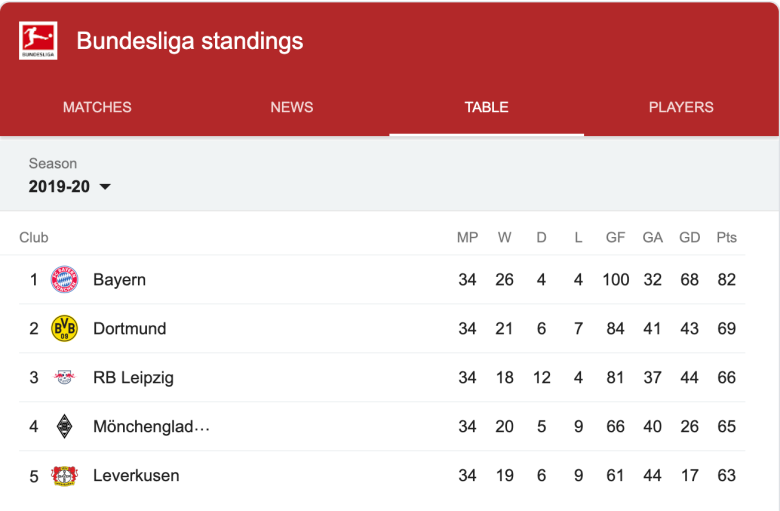 But the gap is much wider when you look at the Champions League. Bayerns domination of the Bundesliga and ability to buy its best players year over year is perfectly reflected in its regular participation in the Champion League, especially its latter stages. The last German club to win the title was in 2012/2013, and that was Bayern. Dortmund were the runners up in that final and have pushed hard to make the quarter finals on a more frequent basis but in general German clubs don’t feature as much at that stage in the competition as other nations (take English clubs as an example).

The real problem however in German football today is that most of the young players breaking into the Bundesliga are foreigners. The training system, which was considered exemplary for almost 10 years has begun to fail. So what broke in the seemingly unstoppable assembly line that trained young players? Firstly, they all understand perfectly well that there is not enough space for everyone in Bayern’s squad. However not everyone wants to go there. Secondly, when the assembly line started working, it encouraged agents to automatically seek better moves for their players either to other leagues or to Bayern.

It’s hard to say what the future holds for German football. German football like most is evolving and change is happening if slowly. There are promising signs with the development of younger talented players like Timo Werner and Kai Havertz but they need to play in a competitive Bundesliga or will  be forced to move abroad in order to experience winning trophies. This would be detrimental to the league and the development of the National team. Bayerns dominance might be exciting for Bayerns fans but unless they can be unseated soon, the damage to German football may take years to repair. Whatever happens, it will be interesting to watch.