The appointment of Jurgen Klopp, the enthusiastic, charming, charismatic yet humble German symbolized better things to come at a suffering Anfield after a year of bitter disappointment and failure. The pragmatic German took the helm of a faltering, heartbroken team, haunted by their failures and separated from their Uruguayan Dream. His six-year contract symbolized the beginning of a long-term project – unlike other managers in the league, he looked to secure the club’s future by being conservative and dedicated.

Fast forward one year, and his talented squad are already reaping the benefits of his experience, tactics and unique transfer game. Liverpool have all of the qualities to challenge for a top four position, or even mount a title challenge. Everything points in their favour, and it’s not difficult to see why.

Klopp’s long tenure at Dortmund saw him create an unbelievable machine which won its games by focusing around the game of intense pressing. Dubbed as “gengenpressing”, it has become his signature tactic. Over the course of his managerial career, his sublime combination of fast paced yet intelligent pressure has become a staple and recognizable part of his game, much like Pep Guardiola’s possession play, Arsene Wenger’s fast – paced football, or Mourinho’s counterattacking.

Gengenpressing is an intense and intelligent tactic, which draws its success from the focus that it places on pressing the opponent after they win the ball back. Its roots lie in the German playing style – in a league where teams can set up counter attacks in the blink of an eye, rationing the amount of time that they have on the ball can work wonders. Gengenpressing allowed Dortmund to enjoy a number of efficacious seasons.

It has essentially become Klopp’s right-hand man, and it wasn’t extremely difficult to predict that he would carry this style over to the Premier League and imbue it in his players. However, Klopp’s tactics have been tweaked to allow him to get the best out of his squad. There are some subtle changes, and some extremely large ones – that have allowed him to fully harness the power of his squad, allowing them to play electrifying football.

The foundations of his tactic were hastily laid by Klopp during his first season – simple triggers like opponents having their back to goal, or playing the ball backwards caused the team to start pressurizing their opponents. Klopp’s teams always looked to force their opponents out on the wing – this reduces their options, restricting them to one-dimensional play, thus, making it easier for them to win the ball back.

Liverpool’s pressing in the first season was successful, but only to some extent. The squad players were exposed to a high-intensity tactic that required them to be on their feet at all times, which raised concerns for fitness issues. Furthermore, while the players were adept at winning the ball back, they were unaware of what they could do once they did – causing the team to lose out on key attacking chances. Furthermore, when the team engaged in intense presses, they lost their structural integrity, making their defence extremely porous and vulnerable. The likes of Alberto Moreno, who prefer to position themselves in the opponent’s defensive area, didn’t really help Liverpool’s cause. It was clear, after a slightly disappointing first season, that Jurgen’s players needed more time.

It’s quite difficult to summarize Liverpool’s first season under the “Normal One” – a fitting comparison would be to look at Pep Guardiola’s first game in charge for Barcelona, where his world class team were humiliated by the minnows of Numancia. The quality was there (let’s not forget, the Anfield faithful were still blessed by the presence of the Welsh Xavi at that point of time), but the results couldn’t back it up. At the end of a bang average first season, it was back to the drawing board.

Liverpool were the “Special Ones” during the transfer window. They were calm while doing their business, and they only looked at affordable players, while their companions splashed hundreds of millions of pounds on world class players sanctioned by their manager. I believe that their dealings were extremely well played during the window. While other teams opted for high stakes and high rewards, the Anfield board looked to be conservative, which, in my opinion, does have its own benefits.

The one move that makes me marvel at the success of their strategy is Sadio Mane’s move to Anfield. After enjoying a breakthrough season at Southampton, the speedy Senegalese was hired by Klopp to be his jack of all trades. His blistering pace, finishing prowess and ability to find his teammates makes him incredibly versatile and hence playable on most positions in the final third. He mimics the Suarez playing style, taking over games with his complete ability on and off the ball. A 30 million price tag sounds suitable for a player who has proven himself in the Premier League – and also is a bargain for a team who needed a striker to help them in their domestic endeavours.

Mane was the first of many well placed transfers. Over the course of two months, we witnessed the slow influx of young, talented players into Anfield. The likes of Matip and Wijnaldum, in essence, symbolized Klopp’s long term strategy – a long term, conservative project. I like to dub this the “Anti – Suarez effect” – Klopp saw the problems that occurred when the Uruguayan linchpin moved to Barcelona, therefore, he decided to make sure that he had plenty of options to prevent that situation from popping up and blighting him again

Liverpool have been playing brilliantly during the entirety of this season. The probability of them ending up in the top four come May is extremely high, especially if one takes into account the fact that they are playing ­all of their games in England – giving them an advantage that is only shared by Chelsea. So, the odds are in their favour – what has he done?

Blending the tactic of relentless pressing with creative flair, that’s what he’s done. Liverpool’s team is an intermingling of an abstract South American flair, from the likes of Coutinho and Firminho, which allows them to create a new dimension during their attacking efforts. Mane aids them with his superb athleticism, which allows him to catalyze Liverpool’s moves in their attacking third. Meanwhile, in the midfield, Henderson, who’s finally matured, has found the position that suits him and is finally beginning to grow into the role of the captain’s armband. 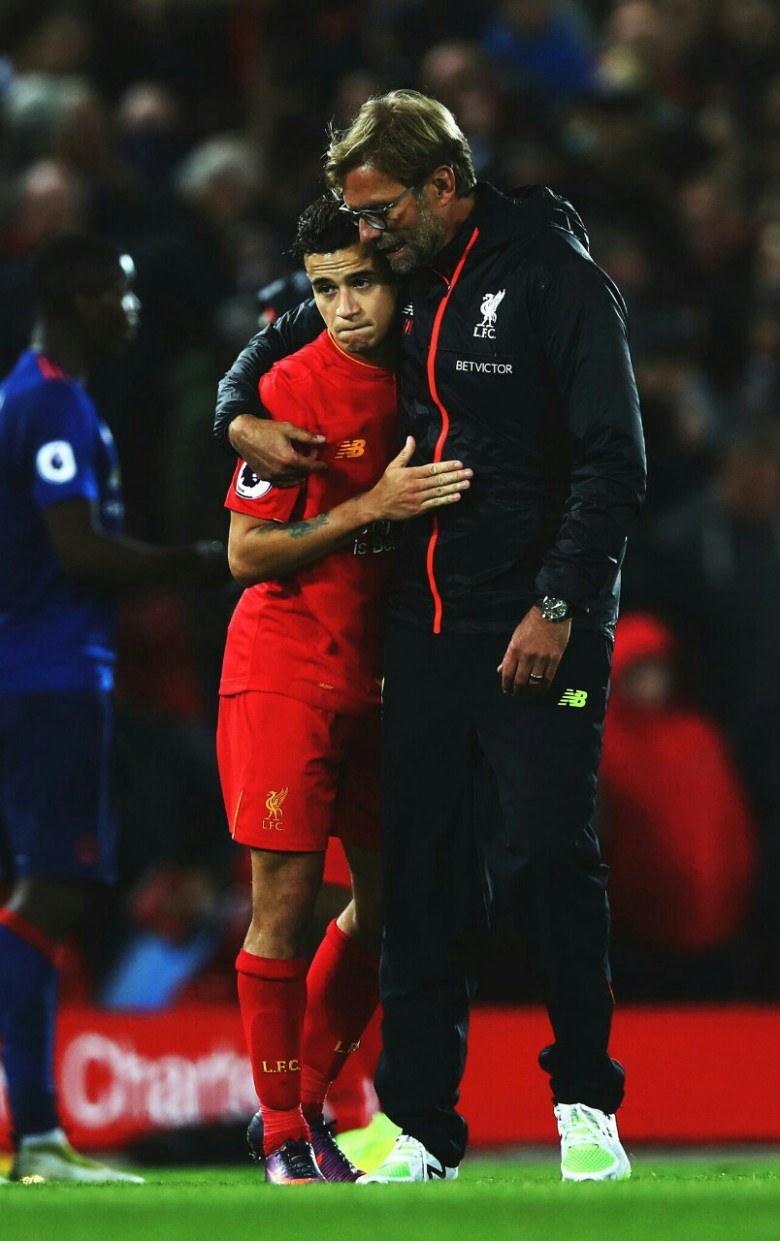 On the other hand, Klopp has finally fully instilled his German pedigree into his team. They now combine positional interchange with high pressure – allowing him to play with no real striker up top. Intelligent and clear systems with near perfect spacing allowing him to reduce the space between his lines, reducing the risk of his teams being caught up and overrun. His efforts have been rewarded with a string of brilliant results. They definitely look capable of mounting a title challenge. The mission to make Liverpool great again has begun.