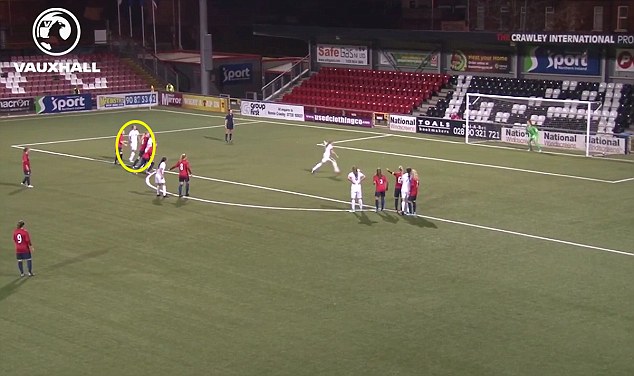 Norway celebrated a hard fought 2-1 victory over England in the Under 19’s women’s Elite Round group 4 qualifiers early last year. But days later those celebrations were muffled after Europe’s football governing body UEFA ruled that part of the match would have to be replayed. In a landmark decision, UEFA stunned football by demanding that the last 18 seconds of the match be played again. The reason behind this was a mistake by German referee Marija Kurtes who awarded a free kick to Norway for an encroachment by England player Rosella Ayane in the run up to a penalty. Having awarded England a last minute penalty with the game at 2-1 in Norway’s favour, Kurtes correctly penalized England for the encroachment (when a player enters the box before the penalty kick is taken) but instead of ordering a retake as the rules say she instead rewarded Norway a free kick. Law 14 states that if the penalty results in a goal (which in this case it did with Leah Williamson converting) but an attacking player encroaches then the penalty must be retake. If however the penalty is missed (and an attacking player encroaches) then an indirect free kick must be awarded. This is where the error by Kurtes happened but is understandable as a misunderstanding of a complex rule. The replay took place three days later just hours after England faced Switzerland and Norway faced Northern Ireland in the last group game. Kurtes for her part was sent home in disgrace and did not officiate the replay.

UEFA set a dangerous precedent with this ruling that could change the direction of football. However this is not the first time that such an incident has taken place. In 2005 Uzbekistan met Bahrain in a fourth round World Cup playoff match. Leading 1-0 in the first leg, Uzbekistan was awarded a penalty which they duly converted. However the referee Toshimitsu Yoshida spotted an encroachment by an Uzbekistan player and disallowed the goal and offered an indirect free kick to Bahrain instead. The game did end 1-0 but so incensed by the mistake, Uzbekistan formally requested to FIFA that the game be recorded as an automatic 3-0 victory. Instead FIFA decided to classify the entire game as void and ordered it to be replayed. The resulting replay ended as a 1-1 draw and after a 0-0 draw in the second leg, Bahrain progressed much to the annoyance of Uzbekistan.

These decisions by FIFA and now UEFA showcase a dramatic swing in the forward direction of the game. The decision also devalues the role of the referee. Once seen as a fundamental part of the game, tasked with holding matches within given guidelines, their role has become marginalized over the past twenty years. Fourth officials were introduced; headphones and microphones added allowing the match officials to talk to one another and recently goal line technology to confirm if the full ball had crossed the line. All of these additions have chipped away at the referee’s decision making process. This all in a world where the game is scrutinized from multiple angles over and over thanks to TV cameras all over the grounds making their job harder. Yes they should be held accountable for their actions and for mistakes that are made however not backing the referee’s decisions could result in their role becoming even less important. The other problem is that now there is an example for teams to use when they feel aggrieved by a referee mistake. Calls for replays will become more frequent but where does UEFA draw the line? Does the ruling only apply to last minute mistakes or would a referee mistake in the first minute of the game result in a replay of the entire match? With the European Championships approaching, would UEFA award a replay during the tournament throwing the scheduling and outcome into disarray?

These questions and more remained unanswered. UEFA insist that their Control, Ethics and Disciplinary Body (CEDB) who fundamentality made the decision were correct to do so and has backed the replay but you have to wonder what Pandora’s box they have opened with it. In terms of the Group 4 qualifying group, the replay which will start with a penalty to England may be irrelevant if England beat Switzerland and Norway win against hosts Northern Ireland. Six points each should be enough to end the group as first and second regardless of the outcome of the replay. However with only the group winners and the best placed runner up progressing to the showpiece event in Israel in July, the stakes are high. England’s 9-1 victory over Northern Ireland on Monday may work in their favour especially if they convert the penalty in the replay and draw the match. In this case with both teams level on points, goal difference would be used to decide who finishes first and who is runner up. If Norway does finish second in the group and is knocked out, they could in theory protest to UEFA or FIFA and insist that the entire game against England be replayed. Then what would UEFA do?