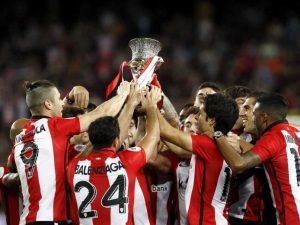 Revenge is a dish best served cold so on a scorching hot night in Spain, it just didn’t look like it was on the cards for Athletic Bilbao.  The Basque country club were still hurting after losing the Copa Del Rey final to Barcelona in May heading into this two legged Super Cup final against the same team. Barcelona, fresh from winning an historic treble were strong favourites to win with the local Spanish press already talking about the feasibility of this Barcelona side completing a clean sweep by winning every tournament that they entered this year. But Bilbao had other ideas heading into the first leg last Friday. Under the guidance of Ernesto Valverde, Bilbao lined up with the intent of stifling Barcelona’s impressive front line of Messi, Suarez and Pedro by deploying two deep lying midfielders in San Jose and Benat in front of the usual four man defence. Valverde knew that Barcelona would have a majority of the possession and that his side’s opportunities would come on the turnover which required his team to pass the ball quickly into offensive positions when they won it back and look to create a chance for lone striker Aritz Aduriz. Little did he know that his plan would work so well.

Straight from kick off, Barcelona were on the attack and controlled the game with some slick passing as they looked to unlock their opponents. Having convincingly beaten Bilbao by 3-1 in the Copa months earlier, Barcelona were confident of finding a way through but knew that like in that game the early goal could help to unravel Bilbao who would be forced to attack more in search of an equalizer. However it was Bilbao who took the early lead thanks to a stunning half way line strike from San Jose after a mistake by Ter Stegen in the Barcelona goal. The German keeper who models himself on compatriot Manuel Neuer in a sweeper keeper role came out of his area after only 12 minutes to head the ball clear only to watch it fall to the feet of San Jose who rifled it back 50 yards into the empty net. Barcelona were shocked but quickly regained their focus as they pushed for an equalizer before half time. However Valverde’s tactics worked perfectly as Benat and San Jose shut down attack after attack, sending Bilbao into the break with a 1-0 lead. The second half started much like the first with Barcelona on the attack with Messi in particular looking threatening. But it would be his opposite number Aduriz who would steal the show in the end and secure Bilbao a comfortable victory with a stunning second half hat-trick.

His first came from a header after some good setup work down the left flank by Sabin. The second goal would arrive only nine minutes later in similar fashion with Eraso whipping in a cross from the right hand side. This time however Aduriz failed to connect with the header but did pounce on the follow up after Barcelona’s defense failed to clear their lines. Now 3-0 up, the 34 year old Aduriz was searching for a hat trick and he would get that chance from the penalty spot when Alves bundled over Etxeita in the box with just over twenty minutes left. Aduriz confidently stepped up to slot home and in doing so placed one hand on the cup for Bilbao.

In the return leg last night at the Nou Camp, Valverde and his men knew that if they could shut down Barcelona once more, the cup was theirs. Operating with a five man midfield with Eraso deployed as a support midfielder for Aduriz upfront, Bilbao looked to contain their opponents until half time. For a long time it looked as though they had managed to do so but when Lionel Messi drove into the box to knock home a downward header from Luis Suarez, Bilbao’s dream of ending their 31 year hiatus without a trophy looked at risk. But during the half time interval Valverde reminded his side that they still held a sizable lead and that Barcelona needed three more goals to get back into the match. Refueled with optimism, Bilbao returned to the pitch with the objective of shutting their opponents down once and for all and did so magnificently limiting Barcelona to only a handful of chances in the second half. As the moments ticked on, Bilbao looked more and more likely to be the victors so when Gerard Pique received his marching orders with only 11 minutes of the second half played, it was a massive boost for Valverde’s side and their chances. They would take full advantage and secured a stunning victory in the 74th minute when some slack defending put Aduriz through on goal unchallenged. His first effort was saved by Ter Stegen but the German could do little to prevent his follow up effort from hitting the back of the net. As the full time whistle blew the Athletic Bilbao players and coaching staff celebrated a historic victory, ruining Barcelona’s chance of a clean sweep. Its their first trophy since 1984 when they picked up the same trophy by beating none other than Barcelona in the final.