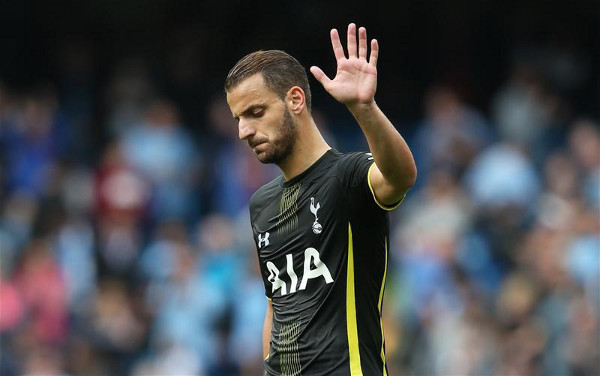 After accepting that they were about to lose one of their best players to Real Madrid, Tottenham started the process of identifying players that they could bring in off of the back of Gareth Bale’s departure. Safe in the knowledge that they were in line for a record transfer fee of £85million, Spurs options were almost limitless which makes what they did so surprising. They decided that instead of spending the majority of that money bringing in a direct replacement for Bale, they would instead use it to strengthen across the entire squad, eventually bringing in seven players for a combined fee of £105million. The club ended the window by breaking even after selling fringe players Steven Caulker, Clint Dempsey, Tom Huddlestone and Scott Parker with many viewing Tottenham as much stronger for doing so. However as the season progressed, it became apparent that out of the seven arrivals – Paulinho, Chadli, Soldado, Capoue, Chiriches, Eriksen and Lamela – few were fitting in and that Spurs transfer dealings in the summer of 2013 had been a disaster.

Two years on and its all change at Tottenham with only 3 of the seven remaining following Soldodo’s departure to Villarreal this week. Paulinho has departed for China in a move that reunites him with former Brazil boss Luis Felipe Scolari at Guangzhou Evergrande. French defensive midfielder Capoue moved to Premiership newcomers Watford this summer in a fairly surprising move whilst Romanian defender Vlad Chiriches also ending his nightmare spell at the club by joining Napoli in July. Soldado’s on off move to Spain was firmly cemented earlier this past week when Villarreal and Spurs agreed to a fee for the 30-year-old Spaniard who has faced the most criticism out of all the arrivals due to his inefficiencies in front of goal. That leaves only Danish midfielder Christian Erikson, Belgian Nacir Chadli and Argentine Erik Lamela at the club but with the Tottenham faithful yet to be convinced by Lamela, further departures could be possible. In all Tottenham have received around £31.8million for the four departed players this summer against an initial outlay of £60.5million in the summer of 2013, effectively selling them for half price which has left a heavy black mark on the clubs transfer records.

These losses quite simply are unacceptable and highlight the serious errors made by Spurs Chairman Daniel Levy and Technical Director Franco Baldini who orchestrated these transfers. Spurs scouting system will also take some of the blame but that issue has been rectified in recent months with the arrival of Paul Mitchell from Southampton in November as the new Head of Recruitment. Mitchell’s arrival heralded a change in structure which saw Baldini moved off of player negotiations and scouting to focus solely on out going transfers. This has marginalized his role to such an extent that his announced exit earlier this month was hardly unexpected. The Italian has agreed a compensation package and will depart at the end of the transfer window in yet another strange move by the club. Given that Baldini has been made the scapegoat for what happened two seasons ago in the transfer window, allowing him to stay on until the end of this one doesn’t make a lot of sense. Levy, who considers himself to be a tough negotiator and always able to get a good deal for Spurs must take a lot of the blame as he was deeply entrenched in all of the signings made that summer. But the chairman survives, aided by the fact that he coaxed Real into spending £85million to buy Bale in the first place.

For the remaining three players, only Christian Eriksen looks like a solid investment. The 23-year-old was brought in from Ajax for a fee of £11million and has been fantastic for Spurs over the past two seasons. His value and stock has risen dramatically at the club who will eventually have to sell the playmaker to one of Europe’s elite when he “outgrows” Tottenham. Until then Eriksen operates as part of Spurs attacking force often in an central attacking midfield role just behind the striker or on occasions out wide. The versatile two footer found his goalscoring form last season bagging 10 goals much to the delight of manager Mauricio Pochettino and the White Hard Lane faithful. Also finding form last season was Belgian Nacir Chadli who struggled early on to adapt to the more aggressive style of defending found in the Premiership. He looked certain to leave after only six months at the club, but a change of management and a renewed confidence propelled Chadli on to better things. Last season he match Eriksen’s attacking threat by notching ten goals himself helping Spurs to a fifth place finish. Chadli is now considered as a starter and an important part of Pochettino’s plans much to the players delight.

The arrival of Pochettino from Southampton last summer instilled a new sense of confidence into the Spurs players but none more so than fellow countryman Lamela. Like Chadli, Lamela had suffered from an inability to adapt in his first season which lead to poor form and a spate of avoidable injuries. This past season Lamela started to show glimmers of what he was capable of, including his fantastic rabona goal in the Europa League but the Argentine winger has still a lot to prove to the fans who are filled with questions about the talented player. Lamela knows that this season is make or break and is geared up to be a success so that he isn’t next out of the door. He has the backing of his manager and teammates but more importantly Daniel Levy who can ill afford for Lamela, the jewel of his seven 2013 signings, to fail.