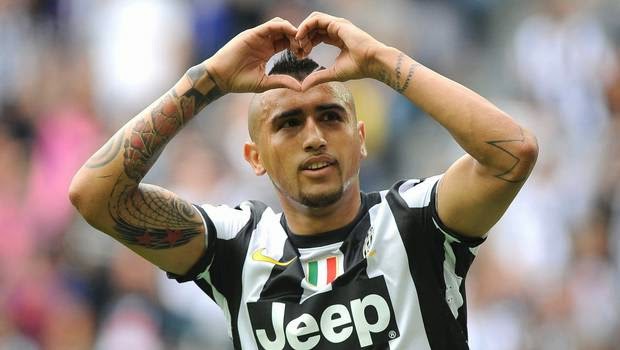 Losing a World Cup winning midfielder just a month before the new season begins could have the potential to derail a clubs preparations and result in a sluggish start to the new campaign as they frantically try to adjust. However this won’t be the case for German champions Bayern Munich who let German icon and recent World Cup winner Bastian Schweinsteiger leave for Manchester United last week. It is business as usual for Pep Guardiola’s side who are already filling the void left by Schweinsteiger by purchasing Juventus and Chile star Arturo Vidal. A fee of €40m has been agreed between the clubs for the tireless midfielder who will now travel to Germany for a medical and to finalize terms. It will be a welcomed return to German football for Vidal who left Bayer Leverkausen in 2011 to join The Old Lady in Turin.

Vidal has been a huge success in Italy, helping Juventus lift four consecutive Scudetto’s and reach the Champions League final last year. But that defeat to Barcelona now sees a break up of the existing squad with several key players either on their way out or having already departed. Carlos Tevez has returned to Argentina with Boca whilst creative maestro Andrea Pirlo departed for the MLS. Speculation has been constant around the futures of midfielder Paul Pogba, striker Fernando Llorente and Vidal with the Chilean now set to be next out of the door. Juventus have strengthen already in several positions as Massimiliano Allegri shuffles his pack but the loss of Vidal will hit them hard regardless. Alongside two of either Pogba, Pirlo and Marchisio, Vidal has been the driving force in the Juventus midfield for the past few years. Comfortable as a defensive midfielder or in a more central position, Vidal’s no nonsense approach to the game bears resemblance to former Italian star Rino Gattuso who acted like a bulldog in the heart of AC Milan’s midfield a few years earlier under Allegri. However unlike Gattuso who was more comfortable sitting back, protecting the back line whilst others created in front of him, Vidal is more of a box to box player creating as many opportunities for his strikers as he does preventing them at the other end. He has benefited hugely from playing alongside the highly experienced Pirlo who has shown Vidal how to read the game better, involved his teammates more and pinpoint attacking opportunities before they happen. This tutelage has made Vidal a better all round player and is now regarded as one of the best midfielders in the world.

The chase for his signature has been going on for months now with Arsenal and Manchester United making several enquiries only to be told by the polite Vidal that he wasn’t ready. The Chilean wanted to win the Champions League with Juventus and the Copa with Chile this summer before thinking about a move. He may have failed at the first objective but was instrumental as hosts Chile beat Argentina in the final to claim their first ever Copa title. Bayern boss Pep Guardiola has been a fan of Vidal for some time now with suggestions that he attempted to bring him to Barcelona before the Chilean moved to Juventus. But the Spaniard would not lose out this time and has swooped under the radar of all other clubs to sign the player. Along with fellow new arrival Douglas Costa, signed from Shakhtar Donetsk for €30m at the start of the month, Vidal will be part of a new look Bayern midfield as Guardiola looks to build on their domestic dominance in the Bundesliga success with similar success in Europe, namely the Champions League. Vidal will likely operate as part of a new look midfield trio with Costa and the never aging Xavi Alonso who Guardiola will look to as another Prilo like figure for Vidal.

One player who may not be part of that new look team is Mario Gotze. The forward, who scored Germany’s World Cup winning goal after coming off the bench is set for talks with Juventus about a move after falling out of favour with Guardiola. The former Borussia Dortmund star would move as a separate deal but the revenue generated from his sale would help to cover the outlay for Vidal. Both players offer something different and are not like for like replacements for each other so its hard to judge which side is getting the better end of this deal. For Gotze, it’s a chance to resurrect his career which has somewhat stalled since that dramatic night in Rio. For Vidal its a chance to show that he is one of the worlds best midfielders and that with Guardiola’s help he can finally lift the trophy he has been hoping for – the Champions League.