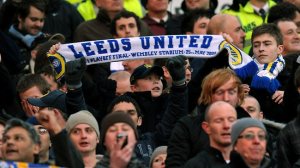 Life as a Leeds United fan is never easy. This season more than any has tested their loyalty to breaking point with several off field dramas blighting what looked to be a promising season. Pre season optimism fuelled by an exciting batch of new young players coming through led many fans to wonder if this would be the season that Leeds finally pushes for promotion. That enthusiasm however lasted only a few weeks after controversial owner Massimo Celino appointed the inexperienced Dave Hockaday in mid June to lead the team into the new campaign. The fans were naturally disappointed by the move as they believed it was a step back for the club and a ploy by Celino to save money (Hockaday was reportedly paid only 1/8th of what his predecessor Brian McDermott was on). Hockaday’s only previous managerial job was at Forest Green Rovers in the Conference League but was sacked by Rovers in October 2013 after a run of poor results. Hardly the pedigree manager that the Leeds fans were hoping for. Despite this, the fans backed the team and after an impressive series of wins in friendly games, the optimism returned to Elland Road once more, with many wondering whether they were wrong about their new boss.

After narrowly avoiding relegation the year before, Leeds needed to start the season well if they were to finish in the top six but within the first eight minutes of their opening game of the season against Millwall, it was clear that Hockaday hadn’t gotten the memo. Leeds lost that match as well as two of the next three matches leaving the club dangling near the bottom of the table. Despite a resurgence which saw Leeds beat Bolton, Bournemouth and Huddersfield, Hockaday was eventually sacked and replaced by the Strum Graz manager Darko Milanic. The former Slovenia defender’s appointment meant that he became the first non British or Irish manager in Leeds history. Just over a month later he picked up another first by becoming the first sacked foreign manager in Leeds history after failing to win any of his six games in charge. Celino reacted to the fans backlash of yet another failed manager by promoting from within bumping Academy boss Neil Redfearn to the hot seat. His appointment, along with a change in formation to a 4-2-3-1 approach revitalized Leeds season which by that point was in free fall. Granted it did take a few months for his new look side to embraced the formational adjustment but when it finally clicked against Bournemouth in late January, Leeds were flying. In the period between his appointment in November and the Bournemouth match on the 20th January, Leeds picked up only 10 points from 12 games with a win rate of 16%. Over the next twelve games, Leeds racked up an impressive 25 points with a win rate of 66%. Finally the Leeds fans had something to smile about as their team climbed to mid table safety.

But then things began to unravel. Redfearn’s assistant Steve Thompson was shockingly suspended by the club by Sporting Director Nicola Salerno due to an internal matter. No reason was given for the suspension and worst of all Redfearn had not been advised about the suspension prior to it happening. Redfearn, who specifically targeted Thompson for the assistant role when he took over as manager was furious and complained to the board stating he felt undermined and would have to consider his role at the club. Without Thompson to assist him, Leeds suffered a drop in form losing five of their remaining eight games of the season and picking up only a single win along the way. Leeds playoff chances were dead and along with it the confidence of the fans in the current regime. The return of Celino after a four month hiatus due to a suspension by the Football League for tax evasion in his native Italy, has hardly given them a renewed energy with many hoping that someone else will come in and buy the club. The situation is so dire that even rumours that Hollywood actor Russell Crowe could purchase the club were welcomed warmly by the Leeds faithful. Anyone is better than Celino at least in the eyes of the Leeds fans.

Once a dominant force of English football, Leeds recent demise due to poor management and unnecessary off field drama is a sad reflection on the game today. The club has so much to offer a potential purchaser – a long colourful history, an established and loyal fan base and an impressive stadium (albeit in need of some upgrading). The squad isn’t bad either – with a good mix of home grown players like Sam Bryam, Lewis Cook and Alex Mowatt and experienced Championship players like Billy Sharp and Luke Murphy. Added into this an accomplished manager in Neil Redfearn who understands the club and its rich history, Leeds are a good purchase for any wannabe investor. Leeds fans will be hoping that this summer brings stability back to their club in one way or another and finally they can start to dream once more about a return to life in the Premiership where they belong.