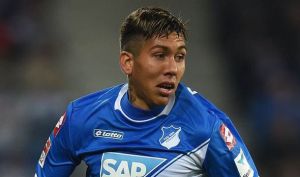 Liverpool have completed the £29 million signing of Hoffenheim star Roberto Firmino. The Brazilian, who is currently with the Brazil squad playing at the Copa America in Chile has penned a five-year deal worth a reported £100k per week. He becomes Liverpool’s second biggest transfer of all time, behind Andy Carroll and will likely operate as a solo striker in a new look 4-2-3-1 formation for Liverpool next season. He is Liverpool’s fifth signing so far this summer with manager Brendan Rodgers masterminding a complete revamp of the squad that failed miserably last season. With Raheem Sterling edging his way towards the exit, Firmino’s arrival pending a work permit will be a welcome boost to the bewildered Anfield crowd who must have been wondering how Rodgers would reshape the squad and how much money would be spent in doing so. The signing is a show of good faith by the clubs owners, Fenway Sports Group who continue to invest in the club and its infrastructure. That said whilst they have sanctioned the move for Firmino, it is in no way an indication that they are completely bought in to the player being a success and will be watching with interest on how he pans out.

At only 23, Firmino is a viewed as a long-term investment but a potential high risk. His transfer fee maybe second only to the amount Liverpool paid Newcastle for Andy Carroll but his potential sell on value will be much higher especially if he performs. Liverpool have taken calculated gambles like this in the past to varied results. They bought Luiz Suarez from Ajax for £22.8 million, only to sell him four years later to Barcelona for £75 million. Similarly Fernando Torres arrived in the summer of 2007 for just over £20 million before departing three and a half years later to Chelsea for £50 million. There have however been epic failures as well. Last season Mario Balotelli was brought back to England for £16 million but has struggled to live up to the expectations that followed him. Liverpool are now desperate to cut their losses and rid themselves of the misfiring Italian. Balotelli’s signing however was only a fraction of what Andy Carroll cost. At £35 million, he is Liverpool’s most expensive signing to date and their most spectacular flop. Forty-four appearances over an ill-fated two-year stint saw a return of only six goals for the England striker. Liverpool eventually shipped him out on loan to West Ham for an initial £2 million loan fee before selling him permanently to the Hammers for  £15 million a year later.

Brendan Rodgers knows hat he cannot afford for Firmino to be a flop as his neck is edging closer to the guillotine. With Jurgen Klopp waiting in the wings to take over, Rodgers probably only has to Christmas to prove to the board that he should remain in charge. With Daniel Sturridge out until October at least and his other striking options, Balotelli, Borini and Lambert all heading for the exit, the pressure is on Rodgers to make Firmino a success.  The stats however do not bode well. Despite finishing the 2013-2014 season with Hoffenheim on sixteen league goals, it’s the only time the attacking midfielder turn striker has ever finished in double figures in a league campaign. Much of his success in that season can be attributed to the players around him, like the talented Kevin Volland. The 22-year-old German international had a stand out season that year netting nine times and laying on eight assists, half of which were for Firmino. More concerning is that in that season, Firmino was averaging only two goals a month, hardly a strike rate to write home about. Last season, Firmino only netted seven times despite making the same number of appearances as the 2013-2014 campaign. To be fair, he did operate more as an attacking midfielder in those campaigns than as an out-and-out striker. Which begs the question of why Rodgers would gamble so much on a player who isn’t really a centre forward by trade?

Firmino no doubt has talent and is playing a starring role for Brazil in the Copa in the absence of the now suspended Neymar. But the question still remains on whether he is the right man to lead Liverpool’s front line next season. Firmino started his playing career as a defensive midfielder but has slowly been pushed further forward by the coaches he has worked for as they exploited his talents. For both Brazil and Hoffenheim, Firmino has operated as an attacking midfielder and as a striker but its fair to say that his most comfortable position is the former. From there he can dictate the play, create chances and roam free. As a striker, especially a solo one that ability to roam is curtailed and his role is dramatically changed from provider to finisher. Arguably he can be dropped back into that attacking three for Liverpool when Sturridge regains his fitness but that wont be for some time. Until then Firmino will have to play in that central striker role with Rodgers hoping he is more of a Suarez or Torres than a Carroll or Balotelli. If Firmino succeeds, Rodgers will be hailed as a genius for spotting his potential. But if he fails, the manager could quite easily be regretting this gamble as he packs up his desk and makes way for Klopp.