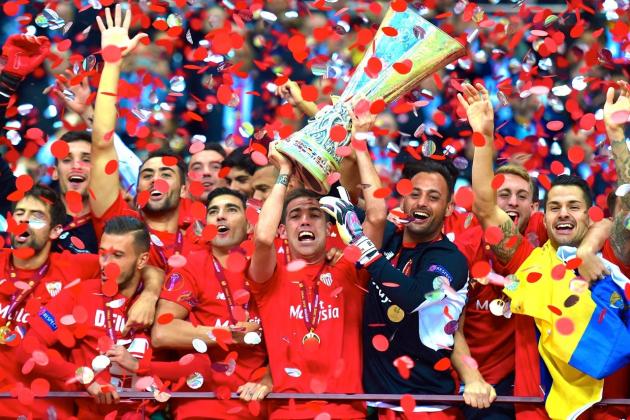 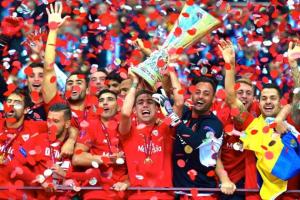 For the briefest of periods, It looked like an upset was on the cards but in truth Seville were always in control. Despite falling behind to a seventh minute header by Nikola Kalinic, Seville dominated their Ukrainian opponents, FC Dnipro Dinpropetrovsk from the first minute to the last during last night’s pulsating Europa League final. As current holders, Seville entered the match as clear favourites with the single objective of winning a record fourth Europa League title. In almost every area Seville were the stronger team winning the game with over 62% of the possession, forcing more corners and subsequent chances and in the end scoring more goals than their opponent. As always it was Colombian striker Carlos Bacca who settled the tie with his second and Seville’s third of the game as the match ended 3-2. After falling behind to Kalinic’s strike, Seville stepped up a gear and within twenty minutes were 2-1 up and cruising. Dnipro did manage to peg them back to 2-2 with a fantastic free kick from Ruslan Rotan but Bacca would have the last word after Dnipro failed to clear their lines properly.

Credit where it is due for Dnipro who shocked many with their spectacular run to the final. Led by the highly experienced Myron Markevych, Dnipro’s Europa League run started back in September with a difficult playoff match against Croatian side Hajduk Split. A 2-1 aggregate win was enough for Dnipro to secure passage into the Group stages where they would be paired with Inter Milan, Saint Etienne and Azerbaijan Qarabag. Dnipro would struggle in the group losing three of its six fixtures including a shock 1-0 defeat to Qarabag at home. As Inter romped home with the group’s top position, Dnipro squeezed through in second with only seven points. They were handed a somewhat unexpected hand in doing so by the totally inept performances by Saint Etienne throughout the entire group stage as the French side failed to win a single game. This appeared to be the kick in the backside that Dnipro needed as Markevych’s side stepped up a gear in the knock out rounds. They dispatched Olympiakos with ease in the round of 32, and then scrapped by on away goals in the round of 16 against a resilient Ajax. Club Brugge followed suit in the quarter finals before they beat Napoli in the semi’s to advance to the final against Seville.

What makes their run so special is the makeup of their squad, with no real star players but instead a talented group of players who play for each other. In their squad of 31 players, twenty of them were born and raised in the Ukraine. Their captain Rotan and vice captain Yavhen Konoplyanka are both seasoned Ukrainian internationals along with several other members of their team. Whilst their run to the final was anything but pretty, and brings back memories of a similar run by Glasgow Rangers in 2008, the squad played each game with an intensity that cannot be criticized. They gave it their all in every match and for that alone deserved their spot in the final. For many of these players this will be their greatest moment and for others like Rotan, Konoplyanka and Valeriy Fedorchuk it could be the stepping stone to their next big move. Reaching a European cup final, regardless of how you got there needs to be commended but on the night it proved a step too far for Dnipro who gave it their all but were undone by a masterful Seville side.

It’s the perfect end to the season for Seville who faltered in La Liga midway through the year despite a strong start which saw them lose only once in their first nine games of the season. Manager Unai Emery has built a powerful squad with a strong backbone of Sergio Rico, Timothee Kolodziejczak, Ever Banega and the irreplaceable Carlos Bacca. The win gives Seville back to back Europa League trophies, the first team to do so twice having won back to back titles in 2005 and 2006 as well. The win in Warsaw hands them an automatic place in next year’s Champions League but for many it will have been their final appearance for Seville as several clubs across Europe eying big money moves for them. Top of the list is Bacca who has been in blistering form for Seville this season and has proved his ability to handle the pressure at a higher level after his move three years ago from Club Brugge. Rookie keeper Sergio Rico is also attracting interest after his stellar performances in the second half of the season. The young Spaniard profited from injuries to both Beto and Mariano Barbosa in early September and did enough in the next few games to give Emery food for thought. He eventually promoted Rico to the backup goalkeeper position in December ahead of Barbosa and then later ahead of Beto. Emery, who himself could leave the club if the right opportunity presented itself, is keen to hold on to Rico for next season but after the player received his first call up to the Spanish national team, his chances of doing so have decreased significantly.