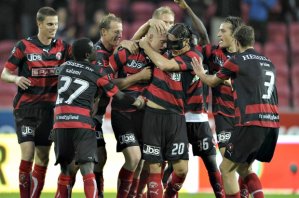 Just under a month ago, Celtic won their fourth successive title in Scotland. Despite Aberdeen pushing them all the way, the Glasgow club managed to hold on and in doing so continued the old firm dominance of the Scottish game that stretches back thirty years to 1985; the last time a team outside of the Old Firm (Celtic and Rangers) won the league. The situation in Scotland however is not unique with several leagues across the world such as the Dutch, Portuguese and Uruguayan leagues being ruled by two or three clubs. In Denmark, those ruling clubs have traditionally been FC Copenhagen, Brondby and Aab Aalborg. Over the past fifteen years, the trio has won all fifteen titles between them. But now that domination looks under threat with a new challenger leading the way as the Danish season draws to a close.

FC Midtjylland’s early season good form may have been dismissed out of hand but it’s hard to argue that their current position on top of the Superliga is not warranted. After 28 games, Midtjylland are 9 points clear with 5 games left to play and are on course for their first ever title. Under the guidance of Glen Riddersholm, Midtjylland have been the team to watch this season with their unique brand of fast break football and clever set up play. Led by the highly experience Kristian Bak Nielsen, the team has played as one all season with no real superstars stealing the limelight. It is this unity and self belief in what the club is trying to achieve collectively that has pushed Midtjylland to the very top. They do still have crunch games against Copenhagen and Brondby to come but with a comfortable nine point cushion with 15 points remaining, it’s hard to see Midtjylland slip up at this point.

The secret to their success has been their business model and more importantly their willingness to adapt to modern day football. With the financial fair play rules coming into effect, clubs across Europe have been forced to have greater ownership of their finances and in a sense tow the corporate line drawn in the sand by UEFA. Whilst a handful of uber rich clubs like Real Madrid, Manchester City and PSG continue to follow the old tried and tested model of throwing cash at a problem to fix it, others are adapting their businesses to allow themselves to live within their financial means more comfortably. But for the smaller clubs across Europe like Midtjylland, the problem of overspending isn’t a real issue to begin with as they are already working within a tight financial structure. Instead they focused on other areas that can give them a competitive edge. Since last summer, the Midtjylland board has embraced the use of statistical analysis to highlight possible potential signings. They are not the first to use this approach but are one of a growing group of clubs who are looking closely at player statistics as part of their recruitment process. Based on the philosophies intorduced by baseball GM Billy Beane in early 2002,  Midtjylland have developed their own model which determines the viability of each player but admit that it is nowhere near perfect and still a work in progress. By example looking for a solid defender is harder than pinpointing a new striker as the metrics are based on events that have happened like shots on target etc. For defenders who stop events happening you have to look at different measurements including what the impact is if you were to remove them from the side. Much more of a perception than an exact science.

Also key to their success has been their willingness to place their trust in youth players from their academy. Whilst historically Brondby and Copenhagen have tied up Denmark’s most promising prospects with promises of riches, Midtjylland have instead promised nothing but opportunity. The opportunity to become a professional at the club and take part in the continuous development of the club. Most youth players have become smart to the false dawns at Brondby and Copenhagen and have placed their faith in clubs like Midtjylland where there is a greater chance of gaining valuable playing time. The players see it as a stepping stone to a larger club, a sentiment shared by the clubs themselves. They are not unrealistic in that sense, understanding that being able to nurture then sell emerging talent only has upsides for both parties as they can use the funds to reinvest in further new young players.

In 2008, Simon Kjaer was sold to Palermo in Italy for €4million whilst Winston Reid left two years later for a similar amount to West Ham. Both players were products of the clubs youth development program which continues to bear fruits to this day. In fact three of the outstanding performers in the first team this year have come from the youth setup. Defender Erik Sviatchenko and midfielders Marco Larsen and Pione Sisto have all had superb seasons and will likely follow the same route as Kjaer and Reid in making big money moves this summer. Whilst it is a challenge to constantly keep rebuilding the squad, the sales of these players allows for the business to continue running at a profit, a model which other clubs are now studying with a view to replicating. Some clubs like Southampton and Lille have mastered this concept whilst others struggle to understand its benefits. This is good news to clubs who have adapted like FC Midtjylland who will continue to use this approach as long as its reaps the rewards.