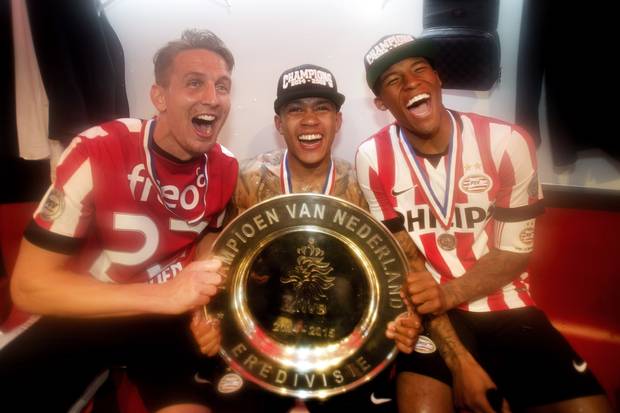 After a long seven year stretch, PSV are back on top of the Dutch Eredivisie after sealing the title this past weekend with a 4-1 win over Heerenveen. For the past four years, Ajax of Amsterdam under the tutelage of Frank De Boer have ruled the roost in Holland with PSV more often than not having to settle for second fiddle. But now with their own club legend in charge in the form of Phillip Cocu, the Eindhoven based club has knocked them off their perch with three games left to play in the season. With PSV winning on Saturday, Ajax needed to beat NAC Breda at home to stay in the race. Despite a valiant effort, it proved a step too far and the dream of a fifth consecutive title faded with the blowing of the final whistle. A point was all that they earned in that match which left them 12 points behind PSV with only nine points remaining. Celebrations across Eindhoven went long into the night as PSV picked up their 19th Eredivisie title, 22 Dutch titles in total. Cocu, who spent six years as a player with PSV during two three year spells sandwiching his time in Spain with Barcelona, only took over as manager in 2013 after a successful spell in charge of the clubs Under 19 setup. His mantra was clear from the beginning that youth should be given its chance and less than two years later, Cocu’s decision has been vindicated with several home grown talents playing key roles in their latest title success.

Players like Jeroen Zoet in goal, Jetro Willems in defence and Jurgen Locadia upfront have all played significant roles in handing PSV their first title in seven years. The trio are part of a young PSV squad whose average age is only 23 that is bursting with talent and enthusiasm; so contagious it’s hard to not want them to win. Cocu managed to constructed a squad on a shoe string budget for the long term using young home grown talent alongside smart purchases but will now face his toughest challenge yet as he tries to hold on to them all during the summer break. Already several keys figures in his team have been linked with moves away from the club, with visiting scouts at every game a testament to the accuracy of these stories. Top of most people’s wish lists are the trio of Adam Maher, Georginio Wijnaldum and Memphis Depay. All three are Dutch internationalists with the latter two of Wijnaldum and Depay earning spots in Louis Van Gaal’s 2014 World Cup squad. Club captain Wijnaldum found the net against Brazil in the third place playoff match whilst Depay scored against Chile in the final group stage to become the youngest Dutchman to score a goal at the World Cup, aged only 20 years and four months. The trio are tipped for greater things and PSV knows that it will have a fight on their hands to keep them all at the club.

It’s no secret that Manchester United boss Van Gaal is a fan of Depay having waxed lyrically about his talents in Brazil. A move for the winger turned striker was touted as early as last summer but with PSV reluctant to let him leave at that stage, Van Gaal was forced to look elsewhere. Now a year on, Depay is back on his radar with the player himself now keen on the move, it should become a formality in the weeks and months ahead. He could be joined in England by Maher with Arsenal keen on the elegant yet graceful central midfielder. Similar in style to Cesc Fabregas, Maher is comfortable on the ball as he is off it. With a good passing range and pace to boot, Maher’s arrival could finally end Jack Wilshire’s injury hit time at the club. Wijnaldum’s next move is less certain but he hardly suffers from a lack of options. Teams in Italy, Germany, Spain and England have all expressed their interest in the attacking midfielder who became one of PSV’s youngest ever captains when he was picked to take over the arm band following the departures of Mark Van Bommel and Kevin Strootman. With strong technique and close control which allows him to change the direction of the ball with ease at high speed, he could become one of the world’s best playmakers if he could perfect his shot. Despite this apparent weakness, Wijnaldum is three goals shy of his best ever return in a PSV shirt with 12 goals so far. He still has three matches left to find those goals and leave the club on an all time high.

All three players would command large fees, money that will be quickly used to reinforce the squad. But Cocu won’t spend all of it on new players, instead favouring the approach of pushing some of the money back into the clubs youth development programs in order to protect its long term future. The money will be used to develop the likes of Steven Bergwijn, Jordy de Wijs and Clint Leemans all of which have flirted with the first team at some point or another during this season. They are the next batch of talented youngsters to emerge, with Cocu keen to put his faith in them just as he did with Maher, Depay and Wijnaldum.