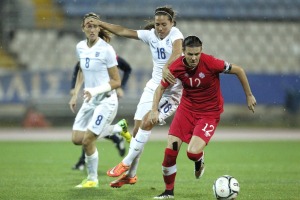 Only FIFA in its disorganized and corrupt state would allow two tournaments’ to run simultaneously. Hard to believe but this week saw the completion of two international tournaments in the women’s game – the Algarve Cup and the Cyprus Cup. The invitation only Algarve Cup to be fair has been running for longer (since 1994) so the addition of the Cyprus Cup in 2008 must have come as a surprise to its organizers. Having another tournament in the women’s international space is not a bad thing but FIFA allowing it to run at the same time is just ludicrous.

With the best teams in the world split between the two cups it’s hard to see how either could be set for success. Crowds were low to nonexistent at both whilst media coverage was limited in several key markets with various media outlets unaware that the tournaments were actually taking place. Yes the tournaments are organized separately but by combining them into a mini world cup format or even scheduling them in separate months would likely be more beneficial to all involved.

It’s another poor reflection of how little FIFA appears to care about the women’s game across the world. Already at the centre of controversy over the decision to test out artificial pitches at this summer’s Women’s World Cup in Canada. Protest rang out from the players when the news broke of FIFA’s intentions to use artificial surfaces rather than grass for the women’s pinnacle tournament. FIFA retorted to criticism of sexism by suggesting that this was a trial for the men’s which they hoped would follow suit. This only angered the players further who saw themselves being used as guinea pigs by FIFA, something the footballing organization denies in a contradictory statement. Despite legal action being taken by a group of high-profile players against FIFA and the threat of a strike before the world cup, FIFA held its stance. Unfortunately for the players, the women’s game doesn’t have the same amount of clout as the men’s does. If the men were to strike, it could cost FIFA financially as well as being a PR disaster but with the women’s game still in development, they are likely years away from having equal billing in FIFA’s eyes.

In the end the results of the two tournaments were hardly important. The Algarve Cup is held on the picturesque Portuguese coast and saw twelve teams from across the world compete in the competitions 22nd iteration. The US secured a 2-0 win against France in the final to lift their record-breaking 10th Algarve Cup. A stand out performance from the controversial Hope Solo in-goal, who made several key stops including a penalty to keep them in the game, pushed the US towards the trophy. At the other end goals from Christen Press and Julie Johnston were enough to see off a French side who had laboured well bit could not break down the resistant Americans.

Elsewhere at the Cyprus Cup, World cup hosts Canada were looking to finalize their preparations for the June-July tournament with a finals appearance. They were hoping to add a historic third Cyprus Cup to their trophy room but fell at the last hurdle to a determined England side. A single goal from Lianne Sanderson settled the contest and handed England the much-needed morale boost ahead of their participation this summer. The style of the win suggest that England will be a feared opponent in Canada this summer.