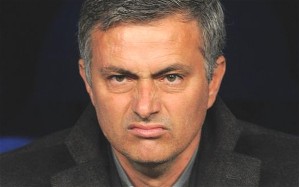 Like him or loathe him, Jose Mourinho has a point. After Saturday’s 1-1 draw with Burnley, the Chelsea manager didn’t hold back on his opinions calling out four moments during the game where he felt that his side had decisions given against them by referee Martin Atkinson. Whilst the Portuguese coach bit his tongue in the post match interview for fear of being reprimanded for negative comments against the referee, he did reveal more on the Sky Sports Goals on Sunday programme about his frustration regarding the decisions being made against his team. Of the four incidents he called out, the high challenge by Ashley Barnes on Nemanja Matic in particular irked Mourinho saying that Barnes challenge should have been a red card. As it turned out, it was Matic who was dismissed after he reacted to the challenge by pushing Barnes to the floor. Looking at the footage however, you can understand why Matic reacted like he did as Barnes challenge was high and reckless which could have resulted in a leg break or worse for the Serbian midfielder.

Former Referee chief Keith Hackett has blasted Atkinson for an incompetent officiating performance and it’s hard to argue with him on that. Atkinson did not have his strongest game which could have been down to fatigue given his midweek excursion to Germany for the Champions League clash between Schalke and Real Madrid. Hackett believes that Atkinson should have been given more time to recover and as a result made some strange decisions during what could be for Chelsea an important match.  Like Mourinho, Hackett believes that Atkinson got the Matic decision wrong and that Barnes should have been sent off. In fact Barnes was lucky to even still be on the pitch when the incident happened given that the Burnley striker had been involved in several unsavory clashes during the match. His high challenge on Branislav Ivanovic in the first half could have been a red card but instead Atkinson chose to ignore it and let the game continue.

For Mourinho it is the latest example of how his team is being picked on and how he feels that crucial decisions in matches are going against Chelsea. Despite his side sitting top of the league, he believes the challenge of winning the league has been made harder by an ongoing campaign to undermine him and his team. Whilst few will agree with him on this, there was support given to the notion that Barnes should have walked after the Matic challenge with former Arsenal player Paul Merson saying that Matic’s reaction was natural given the disgraceful manner of the tackle. Former England winger Chris Waddle also called it a terrible tackle and a potential leg breaker saying that there is no place in the game for tackles like that. Chelsea are appealing the decision but Mourinho believes that it’s fruitless as Chelsea has never won an appeal as far as he can remember.

It’s not been a great week for the south London club who have been dealing with the aftermath of last Tuesday racism storm, where Chelsea fans in Paris travelling to their side’s Champions League clash with PSG racially abused a black Parisian man before preventing him from boarding a train. The incident took the shine off of a solid performance by Chelsea in the Parc des Princes who secured the away goal needed to hand them the advantage for the return leg.  The dropped points in the league however have allowed rivals Manchester City to close the gap at the top to five points after their stunning 5-0 demolition of Newcastle. Mourinho knows that the league is still in his hands and may be using the incidents in the Burnley game to his advantage. After all Mourinho is a king of manipulation and of mass media control often using them to his benefit by taking the pressure away from his team.

The story from Saturday should have been about Chelsea’s inability to find a way past a struggling Burnley side and win the game but instead the focus is switched firmly to the referee and four poor decisions made. It’s a clever tactic by the Portuguese boss who knows better than anyone else how to create a siege like mentality at his club. The us versus them approach worked well in previous campaigns with Chelsea rallying internally against the naysayers who Mourinho painted as being firmly against Chelsea winning the league.  On this occasion with 12 games remaining including crunch games against Manchester United, Liverpool and Arsenal, Mourinho may be looking to gain the upper hand by making the referees more nervous during games they officiate involving Chelsea. Time will tell if he gets his wish and he starts to see those decisions going for rather than against him.

If you liked this post, please repost or retweet. Share your thoughts now on Facebook:https://facebook.com/BackOfTheNetBlog  or on Twitter:https://twitter.com/BOTNBlog