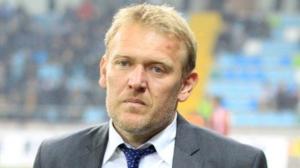 It might not be the most glamorous of jobs in international football but that matters little to Robert Prosinecki who has taken over as national manager of Azerbaijan. The former Croatia midfielder succeeds German Bert Vogts who quit in October after six years in charge. Vogts, who also had spells managing Germany, Scotland, Nigeria and Kuwait, left his position after Azerbaijan lost their opening three matches of the Euro 2016 qualifying. His last game in charge ironically was against Croatia who romped home to a 6-0 victory leaving their opponents firmly rooted to the bottom of their group. At the time AFFA President Rovnag Abdullayev offered Vogts another job within the organization but the German decided to end his affiliation with a clean break. Now Abdullayev has turned to Prosinecki in the hopes that he can inspire the team ranked 126th in the world in the official FIFA rankings to greater things.

This will be Prosinecki’s first taste of international management having only been the boss in club football previously at Red Star Belgrade and Turkish side Kayserispor. He did spend his formative years after retirement as assistant manager to Slaven Bilic during his spell in charge of Croatia but this challenge will be a harder one to handle.  He inherits a team who lack quality and belief that qualification could be possible. Since breaking away from the Soviet Union in 1991, the Republic of Azerbaijan which is sandwiched between Russia, Georgia, Armenia, Iran and the Caspian Sea has struggled to grow as a footballing force in the region with its neighbours stealing most of the limelight. They have yet to reach a major international tournament and have only won a handful of their 100 qualifying games to date. With most of their squad playing either at home in the Azerbaijan Premier League or in the lower leagues in Turkey, it has been a hard for football in the region to develop. Vogts time in charge hardly helped to improve the situation but in fairness to the coach, he did manage to unearth and blood some new players who bring hope to the national team. Vogt’s followed in US national coach Jürgen Klinsmann’s footsteps by looking to Germany for new players and he was pleasantly surprised by what he found. Into the squad came the likes of Ufuk Budak, Tugrul Erat, and Cihan Ozkara, all of which were born in Germany but with Azerbaijani roots.

Prosinecki will likely follow suit scouring Europe for players eligible to play, those who have potentially been displaced by the separation from the Soviet Union in the early 90’s and the troubles that followed. He will be all too familiar with their plight having been born and raised in Germany after his Croatian father and Serbian mother fled Yugoslavia as conflict began. Football was his savour from an early age and it wasn’t long before the tough tackling no nonsense midfielder started to impress. After moving to Croatia aged 10, he was quickly snapped up by Dinamo Zagreb where he would go on to make his debut at 16 years old. Despite scoring a goal on his league debut, he was never given a full time contract and moved to Red Star Belgrade shortly after that. It was in Belgrade that he would start to make waves and before long Real Madrid came calling who paid well over €15 million for his services.

His time however at Madrid would be cut short after three years when they fell out with the player due to his poor attitude towards many of his lifestyle habits that were affecting his play. Prosinecki would leave in 1994 and become a journeyman player with spells at Barcelona, Sevilla, Dinamo Zagreb, Standard Liege and Portsmouth before retiring in 2004 back home in Croatia. Whilst his club career was less than successful, his international career was more colourful. Selected for both Yugoslavia and then Croatia after the breakup of the region, Prosinecki became a key figure for both countries. He played in three World Cups (one for Yugoslavia in 1990 and two for Croatia in 1998 and 2002) and one European Championships (Croatia- 1996) becoming the only player to have scored in a World Cup finals with two different nations. Prosinecki is remembered best for his grit and determination on the field, something he has shown in glimpses since becoming a manager. The task that now awaits him is daunting but given his fierce love of the game and strong self belief, Prosinecki could be the man to turn things around for Azerbaijan.