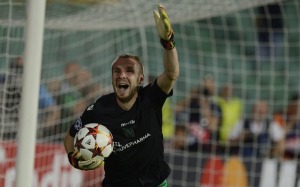 The Champions League qualifier match between Bulgarian champions Ludogorets and Romanian champions Steaua Bucharest should have been fairly non news worth game but instead turned into a memorable affair, at least for one player in particular. Trailing 1-0 from the first leg, Ludogorets had it all to do in this game if they were to secure a spot in the Champions’ League group stage. The Bulgarian’s, playing on their home turf took the game to Steaua creating several good opportunities in the first half but were unable to break the deadlock. The second half began with as much enthusiasm as the first with Ludogorets applying the pressure as they looked for the goal that would peg back the Romanian champions. Shots from Marcelinho and Bezjak went close but the Bulgarian champions just couldn’t find a way past Lithuanian Giedrius Arlauskis in the Steaua goal. As the game wore on, tempers started to flare and ill timed challenges were punished with yellow cards from Spanish referee, Alberto Undiano. In total 8 yellow cards were issued in an explosive 45 minute period including one for Ludogorets goalkeeper Vladislav Stoyanov. With the minutes ticking away and the final whistle fast approaching, Steaua started to believe that they had done enough to progress, that was until deep into injury time substitute Wanderson popped up to score a wonderful volley that would tie the match 1-1 on aggregate and send the match into extra time.

Extra time proved to be much of the same as both sides played out a stalemate with a penalty shoot out clear on the horizon. With tiring legs, it seemed an acceptable way to conclude the match and one that both teams would be happy with, that was until Ludogorets goalkeeper Stoyanov received his second yellow of the night on the 119th minute mark, sending his team into a blind panic. With the shootout imminent and having used all three substitutes, Ludogorets manager Georgi Dermendzhiev looked towards his players on the pitch for a volunteer to step into the void. The task was eventually accepted by Romanian defender Cosmin Moti who grabbed the shirt of substitute keeper Ivan Cvorovic and took up his position in goal. As Alberto Undiano blew for full time and signaled a penalty shoot out, the balance of the tie had swung heavily back into Steaua’s favour. All that stood between them and the lucrative Champions’ League group stage was five penalties and a makeshift goalkeeper. Little did they know what was about to unfold.

Ludogorets won the toss and would take the first penalty, which surprisingly was taken by Moti. The centre back coolly slotted past Arlauskis as if he had not a care in the world, brilliantly hiding his fears for what was to come. Claudiu Kerseru made it 1-1, just before substitute Wanderson saw his penalty saved, heaping more pressure on defender turn goalie Moti. The Ludogorets fans had accepted their fate and believed that this was the turning point with Steaua surely set to progress now. But Moti had other ideas, steadying himself well before reaching high to his right to save Paul Parvulescu’s penalty. The next four penalties for each side would be converted sending the game into sudden death. Fabio Espinho’s perfectly placed shot into the bottom right hand corner evaded Arlauskis’ outstretched left hand putting Ludogorets into the driving seat. Could this be the fairlytale ending to the match that their performance deserved? The answer came only moments later when Steaua Bucharest’s Cornel Rapa stepped up to face Moti. With the pressure now heaped on the nervous right back, Rapa started his long run and struck the ball well to Moti’s right had post. But Moti had anticipated this and was already heading there, gratefully grabbing the ball in mid flight, sending Ludogorets into the Champions’ League group stage for the first time in their history. Some will argue that Moti had come off his line too early and that an infringement should have been called but to the player and the Bulgarian champions fans it mattered not. A legend had been born, Ludogorets were Champions League bound and that was all that mattered. They will learn today who they face in the group stage but regardless of who they get, the dream of playing in Europe’s biggest club tournament lives on for Ludogorets with thanks to an extra special centre back turned goalie.