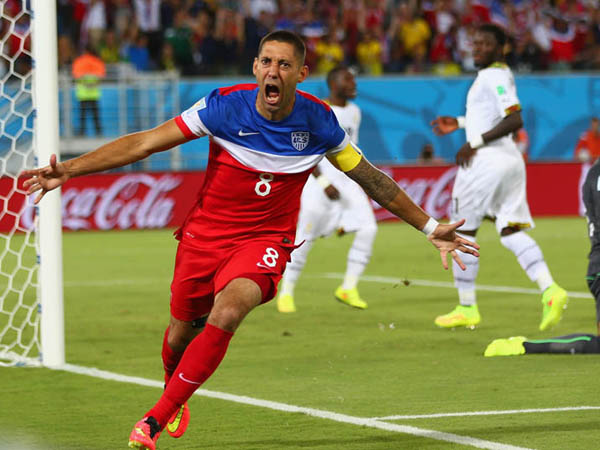 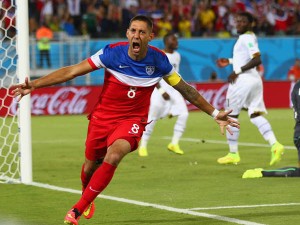 Two games in, four points gained. Not a bad start for a team expected to struggle in a supposed group of death but for US head coach Jürgen Klinsmann it’s the start he expected and he is now looking forward to today’s game against Germany. The job is far from done as mathematically Ghana or Portugal could overtake the US into second spot, knocking them out of the World Cup. Only a point is needed to secure passage although a defeat may still work as long as the goal difference tally remains positive and other results go their way. An electric win against Ghana set them on their way and for a brief moment victory for the second time and secured passage to the knockout rounds was on the cards against Portugal before Cristiano Ronaldo stepped up in the 95th minute of the game to provide a killer cross for Varela to bullet home a header. It was a bitter blow for the US to handle who had taken the game to Portugal from the first kick of the ball. Despite falling behind to a Nani shot in the 5th minute, the US rallied and through Jermaine Jones found the equalizer. When Clint Dempsey drifted into the box in the 81st minute to knock the ball into the net using his stomach, the US bench erupted knowing that they were only 9 minutes away from adding another famous scalp to their repertoire. But any team with Ronaldo in its ranks cannot be discounted and the US paid for a single moment of slack marking that ultimately cost them two valuable points.

Going into the tournament, the focus of all discussions was around Klinsmann’s surprise omission of US legend Landon Donovan from his final 23 man squad. Doubters called it the end of the US World Cup campaign before it began but in truth Klinsmann’s side have looked like they hardly miss the LA Galaxy striker. In goal, Tim Howard has shown why he is consistently one of the best goalkeepers in the English Premier League, whilst midfielder Michael Bradley has demonstrated why Toronto shelled out over $10 million for his services. Up front captain Clint Dempsey has rolled back the years with two heart on the sleeve performances and two highly important goals. Added into this the emergence of new stars like Matt Besler, Fabian Johnson, Jermaine Jones and Graham Zusi have made the US tough to break down and tougher to beat. It really has been a group effort from front to back with all members of the squad playing their part but today’s game will require an extra special push as they face one of the favourites for the tournament. Recent history is on their side with the US beating Germany in a friendly in June of last year by 4 goals to 3. However it would be wise not to be fooled by this result as the German side that Low fielded that day was primarily second string and experimental at best. Today’s team will be tougher, stronger and more technically gifted.

Questions have been asked about Germany’s conviction going into the match and whether Germany manager Joachim Low and Klinsmann will have made a deal to draw the game, a result good enough for both countries to progress regardless of the other result. The pair have history, with Klinsmann appointing Low as his assistant manager when he took over as Germany manager in 2004. When Klinsmann quit after the 2006 World Cup, it was he who recommended to the German FA that Low was ready to take over, ultimately handing the baton straight to his number two. But as much as a deal would suit both teams, it is not in either’s nature to agree to such a thing. Klinsmann is keen to prove that his US side is in the knockout stages on merit, not due to a side deal whilst Low, confident of his team’s progression will be aware that mathematically Germany could still be knocked out if results go against them. Having been beaten finalists at Euro 2008 and beaten semi finalists four years ago in South Africa, Low is desperate to pull Germany over the line and hand them their first World Cup in over 24 years. For Klinsmann reaching the knockout stages is a must and a chance to show his critics exactly how good a coach he is. Remember it was Klinsmann who started the Germany revolution back in 2004 by embracing the country’s youth players like Philip Lahm, Bastian Schweinstegier and Lukas Podolski who have been core to the German push in the last 10 years. Klinsmann will be hoping for a positive result today that sees the US progressing to the knock out rounds and hopefully acts as the springboard for the US national team’s progression over the next ten years.