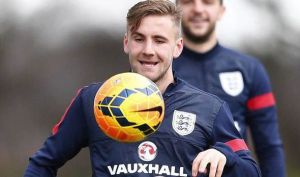 The emergence of Luke Shaw as a future England left back comes at a welcome time for England manager Roy Hodgson as he contemplates what to do with Ashley Cole. The Chelsea defender has hardly featured this season which in a world Cup year has thrown up a lot of questions about who would travel to Brazil to compete for the starting position at left back with Everton’s Leighton Baines. Candidates were few and far between with Aston Villa’s Ryan Bertrand and Manchester City’s Joleon Lescott other options, but youngster Shaw offers a long term option. The Southampton attacking full back has been a revelation for the club since making his debut last season.

Playing for Southampton has been a blessing in disguise for Shaw. Once on the brink of folding whilst languishing in League One, Southampton has rebounded spectacularly and has now become an example club to many in the Premiership. Dangling that close to extinction can be the kick in the ass that most clubs need to evaluate their business model, which is exactly what Southampton did. Once financially secured, Southampton vowed to never fall back into its old ways and decided to invest heavily in youth development. The pay off of this decision is now being felt by the club who boast youth academy graduates like Shaw, Lallana, Chambers and James Ward Prowse as first team regulars. Shaw and Lallana are now full England internationalist and look increasingly likely to be on the plane to Brazil. Shaw made his debut against Denmark and immediately impressed with his willingness to run at opposition defenders in addition to protecting the back line. It was a debut reminiscent to that of a young then Arsenal left back called Ashley Cole. Like Shaw, Cole rose through his team’s youth setup and when he burst onto the scene was one of the most exciting prospects in his position in Europe. He has since gone on to become one of England’s most decorated left backs winning 107 caps for his country in a 13 years period. Now at Chelsea, Cole’s career has started to falter over the past few years. A string of injuries as well as some off field misdemeanors has tarnished his reputation as well as his marriage to pop singer Cheryl Cole. Now 33, Cole looks likely to leave Chelsea this summer for one last stab at first team football. Where has yet to be decided but having a successful World Cup may help Cole to rebuild his reputation and earn him one last big pay day. He needs to get on that plane ahead of all others but his chances are being greatly reduced by the form of Shaw.

One of the stand out performers of this Premiership season, Shaw continues to go from strength to strength. The combination of youthful exuberance and raw talent has benefited Southampton in its push for a top eight finish and has gained Shaw praise from a variety of sources. Former England international and FA Director of Football Development Trevor Brooking has described Shaw as “technically very gifted whilst teammate Adam Lallana described him as “ an outstanding talent and one of the best – probably the best – player I’ve ever seen at 18”. Manager Mauricio Pochettino knows he faces an uphill battle to keep a hold of Shaw during this summer with the vultures already circling. Manchester United, Chelsea, Manchester City and Real Madrid are all said to have expressed an interest in the youngster but like Cole, a sterling performance at the World Cup could help add further names to the list of interested parties. In a flat race between the two, Shaw looks likely to be picked over Cole due to form and future promise. But with Cole you have a professional with years of experience, something which could come in very handy in the pressure cooker environment that is the World Cup. Hodgson has a difficult decision to make and will upset one of the two. Does he favour youth over experience or does he hand Cole one last chance at salvation and a chance to kick start his career again? We will only have to wait one more month before Hodgson is forced to make his call and name his squad for Brazil.