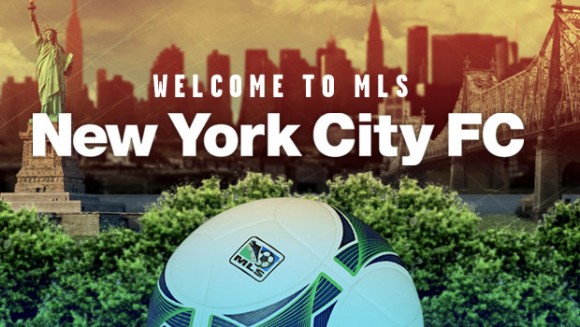 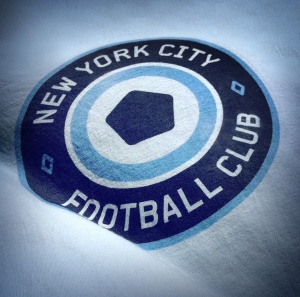 Even before a single ball has been kicked, the frenzy around the Big Apple’s latest team, New York City FC has begun. The franchise, which was announced in May by MLS commissioner Don Garber as the league’s 20th team won’t officially take the field under 2015 but that hasn’t stopped companies from trying to ride the tidal wave that has been created. One such company, New York based Hyperakt have decided not to wait for an official announcement from the club around their kits or logos, instead creating a set of original unsolicited branding packages for NYC FC. Whilst the club hasn’t even released any indications around colour schemes, Hyperakt have gone out on a limb to suggest what they think makes sense for the club and its new fans.

As Creative Director Deroy Peraza states on their website, the Brooklyn based design firm, who are know in the city  for their info graphics and brand identity work, have taken a more minimalistic approach to the creation of the proposed brand and its logo. Pulling inspiration from a variety of sources including the clubs owners (Manchester City FC and The New York Yankees) as well as the city itself and its history, Peraza and his team designed the above logo, incorporating the light blue of Manchester City, the darker blue and white from the Yankees and an ironic symbol of New York past – the famous pentagon from the old now debunked MTA token.

The key component of the new logo is the iconic pentagon which represents the five boroughs of New York itself. Updated by Peraza and his team to give it a more modern field (they removed the sharp edges to make the pentagon more rounded), the shape itself is also a thrown back to the football, which is made up of a series of pentagon’s stitched together, something that amazed Peraza during the design phase:

“It amazed me that I couldn’t think of a single major world football brand that really owned the pentagon shape as a key part of their identity. In New York, everyone had the tokens in their pockets regardless of class, ethnicity, or gender. It’s a truly democratic symbol that was accessible and essential to virtually everyone. Those are the kinds of values I wanted to embed in this club’s identity.”

Being a brand for the people of New York, not dependant of ethnicity or class again harks back to the overall philosophy of this team being for the people. The NY Redbulls have faced much criticism for not being a New York team, preferring to play in New Jersey and stripping their name back to incorporate their wealthy owners, Redbull. Hyperakt have understood this, mostly thanks to Peraza being a football fan himself, living in the city and not feeling a connection.  So in order to bring their new creation to life, Hyperakt created a series of mock ups of what the logo will look like, both across the city as well as on potential strips/kits. Billboards, MTA passes, taxi cab toppers and even phone covers have been added, all of which is now on display on their website. The strips follow the same mould with a very simplistic design, utilizing the two shades of blue and the white to make up the three options for Home, Away and Third kit. The public response has been positive, however some have pointed out the similarities to NPSL side Chattanooga FC’s logo, but the two are very different.

Others like Californian based designer Mike Retrum have also come up with concept designs like Hyperakt did, and incorporate the same principles with a different result.Whatever brand NYC FC chooses in the end will need to win over the fans in an ever increasing competitive landscape. With just over two years before their inaugural kickoff, the club has time to decide but they will be cautious that leaving things too late may make it difficult to win over New Yorkers who are not following the city’s current MLS team NY Red bulls or those joining up to follow the newly reformed NY Cosmos. But Peraza believes that the brand that Hyperakt has created will speak to those fans as it will be the only club in New York that calls itself “City”. Loyalty stems from a sense of belonging and if Peraza can convince New York City FC that his brand sells belonging, then this will go a long way towards the creation of a new audience for the MLS’s latest franchise.

Which concept do you like the best? Or does it not really matter as long as the team is good? Let us know your thoughts, as always on Facebook and Twitter: www.facebook.com/BackOfTheNetBlog or  https://twitter.com/BOTNBlog  #BOTN