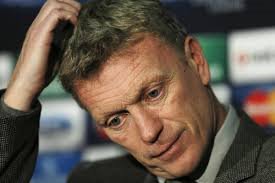 The Theatre of Dreams has turned into the comedy club with teams lining up outside the turnstiles waiting to have their kicks and some points of the current Champions of England. Manchester United now find themselves in the middle of the league, 15 points off the top and 18 off the relegation zone after their 2-2 draw with Fulham. Although Ferguson has urged the fans to give Moyes time as the board did when he was struggling, it’s hard for the current generation of United fans to take following year after year of success. With a legacy as great as Ferguson’s, comes great pressure from the fans and the media and it seems to be overwhelming current boss, David Moyes. Significantly, the challenge the former Everton manager faces is coming directly at home where the team are failing to find a winning combination. Out of 13 games, United have lost six including a 2-1 defeat to West Bromwich Albion. On three occasions this season the Red Devils have failed to score at home, something that only happened once last year in May when the title had already been won. At the time, Old Trafford was buzzing with a real party atmosphere after the return of the Premier League crown and the celebration of Fergie’s achievements over the years. Now the party has stopped as travelling fans come over to mock what used to be a fortress.

The squad is beginning to deteriorate. Nemanja Vidic announced last week that he will be leaving the club in the summer to pursue a ‘new challenge’. Obviously the current situation is a stretch too far even for the Serb to battle against. Rio Ferdinand and Ryan Giggs’s contracts also run out this summer and there is still speculation over whether Wayne Rooney and Javier Hernandez will push for a move in the next transfer window. The loss of their main two centre backs will heavily effect the team and it will probably take time for Moyes to find a partnership that works. For the time being, the team should try and experiment with who they have such as Chris Smalling, Johnny Evans and Phil Jones who were initially brought in to replace the dynamic duo in the middle. Many will argue that a big name is needed at the back as it has been a while since the club has invested in a defensive rock. Players such as Dante and Mangala have been linked with moves but after this season, it’s hard to say whether these players would love a move to this part of Manchester.  Despite the loss of glamour, Juan Mata came in for a club record fee in the January window and he is still adamant that the club is considered a dream move for any player. After signing for the club, Mata said:

“United is the perfect place for me and I am excited at the chance I have to be part of the next phase in the club’s history. Obviously for a player like me who is trying to score goals, assist goals and be a creative player it’s going to be amazing to play with those kinds of players. Wayne Rooney, Robin van Persie, Adnan, Valencia, Chicharito, Welbeck… they are all top-level players.”

The league table may indicate that the team is struggling but Sunday’s performance signalled otherwise after they dominated the game but had the three points nicked in the final minute. Still Moyes believes that the team were at fault for not taking earlier chances despite an encouraging display. Moyes told Sky Sports: “You can have as much possession as you like. We should have scored more. You’ve got to try to keep making it work. The players tried that and eventually the goals did come. Even when it was 2-1 and they put up five minutes of added time, Fulham never came up the pitch, they left us with the ball, so it was nearly a case of just playing out time, but we gave away a diabolical second goal. The players are hurting, I can see every day they are hurting because the results aren’t going the way they want. But we have a good team and there will be very few teams desperate to play us, that’s for sure.”

Manchester United now have a very important game against Arsenal on Wednesday which they need to win to keep up any hope of a Champions League place or even a Europa League spot. The Gunners on the other hand will want to bounce back after their 5-1 trouncing away at Anfield on Saturday which left them one point off the top. It really is make or break time for Moyes.