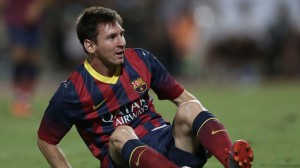 Despite winning 4-1 over the weekend against Real Betis, many Barcelona fans were left feeling bitter after their talisman Lionel Messi picked up a hamstring injury which has ruled him out for six to eight weeks. Can the Catalans keep up their hot form going into the New Year or is this a chance for Atletico Madrid or the Bale/Ronaldo inspired Real Madrid to catch up with the early pacemakers?

This is the fourth muscle injury the striker has suffered in the past eight months and there are concerns that if these injuries continue to reoccur that this could hinder his goal scoring record and possibly his team’s domestic ambitions. The Argentine limped off after eighteen minutes with the score at 0-0 as his team went on to win the game which kept them three points clear of Atletico Madrid. A double from Cesc Fabregas as well as goals from Pedro and Neymar secured the win. Just over a week ago many critics questioned Messi’s form after he went on a four game goal drought but this soon came to an end with a penalty scored in Milan. Now the striker has been ruled out for almost two months and now they are asking where the team’s the goals will come from.

Here is how vital Messi’s goals have been to Barcelona’s last few league campaigns:

Each of the past four seasons, Messi has contributed to at least a third of the team’s goals and in the 2011-12 season, he scored a half century yet the team came second to Real Madrid that year. No other player has come close to his total in these campaigns. Last year the second highest scorer was Cesc Fabregas with eleven. Although his scoring record is quite startling, his side haven’t suffered when he has been absent. The team have won all of their last nine games without the twenty six year old. Alexis Sanchez has been on clinical form for the side scoring seven already and Neymar also has four to his name. So Barcelona may have some firepower behind their star man but how long can they hold form for? Sanchez had a fairly quite season last year compared to his Argentine team mate scoring just eight in the league and although Neymar was prolific in Brazil, can he live up to his £48.6 million price tag?

For the Madrid sides, this latest injury woe could swing the title odds in their favour. Atletico Madrid (currently the better side in the capital), have only failed to win on two occasions from their first thirteen matches. Diego Costa has been red hot in front of goal for the side, netting an average of a goal per game. Real Madrid have obviously got the talent to take advantage of this situation. Cristiano Ronaldo already has sixteen goals and we’re only in November and Gareth Bale is adapting well to life in Madrid with three goals in fewer matches. Arguably the La Liga leaders should be able to hold steady until Messi returns but Gerardo Martino has revealed that he will need to talk to his star man:

He said: “We will have to talk to Messi and see if he is effected because of this. This is his third injury of the season. It is true that it did not take him long to overcome the first but this is the third one and could affect him mentally.”

Here are the next five fixtures in the league for the top three.

Atletico have got a good run into Christmas whereas Barcelona have tough fixtures away at Bilbao and Getafe to come so it could be interesting to see if Los Rojiblancos can push their way to the top. With Messi likely missing until early January, the pressure will be on Barcelona to see if they can keep up the pace and hold on to top spot in La Liga without him.