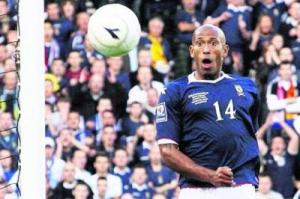 The ball bobbled, it moved slightly before I hit it, the wind swept it up – all reasons given by players who have missed sitters, better known as open goals. It’s every player worst nightmare, the ball falls kindly to you in the box, the keeper is nowhere near to save it, you only have to tap it and your team is one goal better off. But then disaster strikes, all doesn’t go quite to plan and you pull the ball wide or over. It doesn’t happen too often but when it does, no one can forget about it. Every football fan will be able to tell you about at least one bad miss that they have witnessed, either live or on TV or now on YouTube. The latter provides fans with a multitude to chose from but we here at BOTN have chosen three of the worst to share with you so enjoy!

Rocket Ronny Rosenthal made his name in football as a power striker with a hard shot but unfortunately for Ronny he is remembered most for a horrendous miss. The former Israeli international played for a variety of clubs including hometown club Maccabi Haifa as well as stints at Standard Liege, Club Brugge, Tottenham and Watford. But it was his spell as a Liverpool player that made him famous for all the wrong reasons. During the 1992-1993 season, Liverpool faced up to Aston Villa with Rosenthal starting up front. Latching onto a long punt down field from David James, Rosenthal cleared his marker and controlled the ball as the rushing Nigel Spink came to stop him. With some quick footwork, Rosenthal rounded Spink and was through on goal. What happened next needs to be seen to be believed as he hooks the ball up and off the crossbar much to the dismay of his teammates and fans. Rosenthal did recover from this and went on to have a successful career at Liverpool before joining Spurs in 1994.

When Peter Van Vossen arrived at Rangers as part of an exchange deal for Oleg Salenko, he did so as European Cup winner, having won the cup with Ajax a couple of years earlier. He was also a member of the Dutch world cup winning squad so Rangers fans were forgiven for thinking they had signed a star striker. For any player joining either Rangers or Celtic, the instance way to become a legend is to score in the Old Firm derby, something that Van Vossen knew going into his first local derby. With Rangers leading their arch rivals 1-0 going into the closing stages of the game German powerhouse Jorg Albertz broke clear of the Celtic defense with Van Vossen in support and only the keeper to beat. Having drawn the keeper out as he entered the box, Albertz squared the ball to Van Vossen to tap the ball in. But the Dutch striker caught the ball wrongly, sending the ball sailing over the bar. Van Vossen was devastated and spoke to reporters the next day about how he felt to miss:

“Nobody said a word to me in the dressing room afterwards. They could all see how terrible I felt at missing and left me alone. I still can’t stop thinking about it. I hardly slept last night because I kept seeing that miss over and over again. Normally I would have looked for a hole to swallow me up, but there were still 10 minutes left and I had to keep my concentration. I felt there would be more chances for me – and I was right. Their keeper saved well but if I’d done things properly he should have had no chance”

His teammates did eventually forgive him but his time at Rangers was marred after that as the fans coined the term “doing a Van Vossen” as ways to describe a terrible miss.

The latest player to join the ranks, Nicoletta plays for Beerschot AC women’s team in the BeNe League. The star defender was playing in a match against Ajax last month when Beerschot were rewarded a free kick on the edge of the area. Caroline Janssens stepped up to take the free kick, curling the ball over the wall and past the diving Laura Du Ryin the Ajax goal. Unfortunately for Beerschot, who haven’t won a single game this season, the post would deny them the lead but as the ball rebounded back across the goal, Den Ridder was on hand to poke the ball home from two yards. Well that’s at least what everyone thought, until the defender, who was looking to add to her only goal this season, spooned the ball over the bar.  Ajax went on to win the match by two goals to nil thanks to strikes from Desiree van Lunteren and Eshley Bakker but it will be Den Ridder’s miss that will be remembered rather than the score line.

Nicoletta is still young and has many more years ahead of her to help erase the memory of the miss but unfortunately it will never go away. She has to move past it as Van Vossen and Rosenthal did. And she should take solace in the fact that some of the game’s greatest players – David Villa, Fernando Torres, Jean Pierre Papin and Kanu have all missed sitters in their careers and they are all strikers. Or better still, she could just watch the clips below which show that she isn’t the only one to have struggled to score from a few yards out.

To see a host of misses, click here: http://www.youtube.com/watch?v=xKuEDQj7KnA