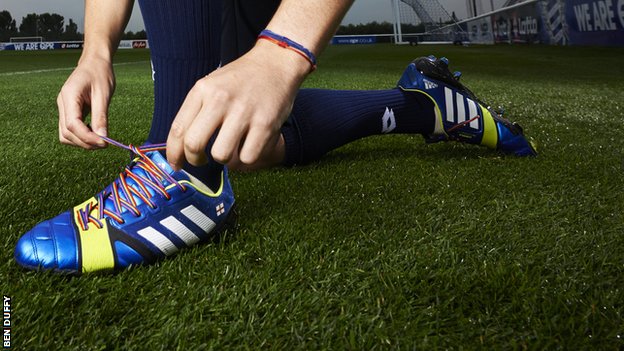 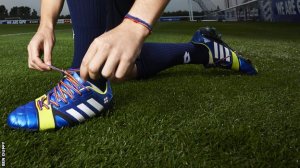 The growing trend of multicolored boots in football will be overshadowed this weekend for a worthy cause, by the introduction of rainbow laces to Britain’s top leagues in an effort to raise awareness of the issue of homophobia in the modern game. Gay rights charity, Stonewall along with betting agency Paddy Power have teamed up to promote “The Right Behind Gay Footballers campaign” which is focused on changing perceptions around gay footballers rather than encouraging those who are into coming out.  Sets of laces have been sent to all 92 Premier League and Football League clubs, plus the 42 teams in the Scottish Professional Football League, by Stonewall with the hope that players show their support by letting their feet do the talking during this Saturday and Sunday’s games.

The campaign already has received its first backer as QPR’s outspoken midfielder Joey Barton tweeted his support earlier this week, encouraging his fellow professionals to show that sexuality isn’t an issue in football. Stonewall’s deputy chief executive Laura Doughty echoed Barton’s sentiment in a statement where she called for the need for football to adapt to the times:

“It’s time for football clubs and players to step up and make a visible stand against homophobia in our national game. By wearing rainbow laces players will send a message of support to gay players and can begin to drag football into the 21st century.”

Currently the British leagues and the 134 teams that play in them have no known gay footballers in their ranks, though it is thought that some players are living in fear of admitting their sexual preference. It’s hardly surprising given the treatment handed down to Justin Fashanu (picture above) some thirty years ago, that still lives fresh in the memory. Fashanu, brother of former footballer and Gladiators presenter John, was the first openly gay footballer in the English leagues and lived with years of homophobic abuse before eventually taking his own life after suffering from depression. Recently former Leeds midfielder and US star Robbie Rogers decided to retire from the game at the age of 26 so that he come out to the world. It’s a reflection of the current game and its non evolution that a player feels it’s a better option to quit than to live with the potential torment from his fellow pros. Thankfully Rogers received a lot of support from various places and decided to end his early retirement and sign on at MLS side, Los Angeles Galaxy.

Homophobia is often considered a taboo subject in the British game, much like racism which continues to rear its ugly head. Last year’s incident with Chelsea defender John Terry, who was accused of racially abusing QPR defender Anton Ferdinand left a bitter taste in the mouths of many including the English FA. Not wanting to rock the apple cart, the FA gave Terry a meaningless slap on the wrist (a four match ban and a £220,000 fine which equates to two weeks wages for Terry) sending the wrong message to many in the game and watching from a far. Like homophobia, the football governing bodies in the UK promote zero tolerance but when forced to act to a live case, nothing happens citing a possible reason way Rogers felt that his only path was retirement. With nearly 5,000 players across all the teams in England and Scotland, the odds suggest that some may be hiding away in fear of what will happen in their careers if they were to reveal themselves.  In no other profession would it be acceptable to discriminate against sexuality, but it appears as though it remains in the country’s favourite sport. As the players take the field this weekend wearing the rainbow laces, let’s hope that they are taking the first steps forward in eradicating homophobia in the British game.