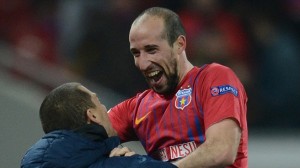 Steaua Bucuresti took one step closer to the group stages of the UEFA Champions’ league this week when they dispatched Georgian champions Dinamo Tbilisi over two legs during the third qualifying round. The reigning Romanian champions and former European Champions Club Cup winner (1985/1986 season) led by 2-0 going into the second leg of the tie and needed only a draw to progress. The game itself started at a blistering pace with Steaua having most of the possession. They finally made the breakthrough and in some fashion after a wonder strike from defender Iasmin Latovlevici saw them take a 5th minute lead.

After some strong wing play, a blocked cross led to the first corner of the match for the Romanians.  With the ball whipped in at pace by captain Alexandru Bourceanu from the corner, the only thing that the Tbilisi defence could do was head the ball clear, towards the edge of the area. However unknown to them, Latovlevici was lying in wait just outside of the box. After watching the ball drop, Latovlevici steadied himself before unleashing a breathtaking volley that flew over the heads of the oncoming Dinamo players, past goalkeeper Giori Loria and into the top right hand corner of the net. In a fitting tribute, Latovlevici dedicated his strike to his injured teammate Paul Parvulescu, who suffered from a punctured lung earlier this year and is still recovering, by holding up Parvulescu’s number 22 shirt.

Steaua now progress to face Legia Warsaw of Poland in the final qualifying games, with the winner progressing to the lucrative group stages of the Champions league. Having won their 24th title, making them the most successful club in Romanian history, Steaua are on a roll and a return to Europe’s premier competition after a six year absence would be a welcome bonus for the club. Despite playing regularly in the Europa league over the past few years including a successful run to the semi finals in 2005/2006, the Champions League is seen by the club and its ambitious captain, Alexandru Bourceanu as the only place Steaua want to be playing:

“If we don’t manage to qualify for the Champions’ League group stage, reaching the Europa League will still feel like a disappointment. For me, failing to get to the group stage would mean that 2013 has been a poor year – despite us winning the league, the Super Cup and going far in the Europa League. We have a huge desire to qualify, especially as it would be the first time for all our current players.”

Under the guidance of current head coach, Laurențiu Reghecampf and with a batch of young exciting Romanian players like Nicolae Stanciu, Gabriel Iancu, Lucian Filip and Parvulescu in the squad, the future looks bright for Steaua. With their domestic defence of their title already underway and having beaten arch rivals Dinamo Bucuresti last weekend, confidence is high going into next Wednesday’s clash with Legia. Steaua will be looking to give their all over the two legs to guarantee their place in the coveted Champions League and avoid another season slugging it out in the lesser fancied Europa League.