Cristiano Ronaldo has started this season in a sulk. He is expected to be angry with UEFA over their recent award of European Player of the Year to Andreas Inestia, despite the Portuguese star having his best season to date scoring 60 goals in all competitions. The 27-year-old was caught on camera at the award ceremony (left) looking frustrated as Inestia was declared the winner, shaking his head and tutting. But perhaps it has nothing to do with UEFA but in fact a recent article published by Spanish newspaper Marca on the topic of the World’s best paid players that has Ronaldo in a fuss.

The article drew comparisons between the worlds best players and ranked them by their annual wages. Ronaldo, considered by some to be the greatest current player, didn’t even make the top 5, barely scraping into the top 10 in last place with an annual salary of €10million:

The list is topped by Cameroon international striker, Samuel Eto’o who currently picks up a yearly wage of €20million, double that of Cristiano, at Russian club Anzhi Makhackala. Swedish striker Zlatan Ibrahimović is in 2nd position on €14.5million after his recent move to mega rich PSG in France, with Cristiano’s former Manchester United teammate, Wayne Rooney completing the top three on €13.8million.  The inclusion of Manchester City players Yaya Toure (4th) and Sergio Aguero (5th) alongside Chelsea’s Fernando Torres (7th) may give Ronaldo food for thought as he ponders a potential return to the English Premiership. If he is to leave Real Madrid in order to increase his wealth, England or France would make the most sense from a financial and footballing prospective even if wealthier teams in Russia and China could offer him considerably more. But the table above only tells half of the story.

Marca’s article only looks at annual wage and not total salary so strips out merchandise rights, image fees and sponsorship deals. In fact, in 9th place, Lionel Messi appears to be missing out by staying at current club, Barcelona. However, when you look at this year’s total earnings, Lionel Messi is the world’s richest player on €33 million yearly. David Beckham lies in second on €31.5 million with Cristiano Ronaldo completing the top three on €29.2 million. 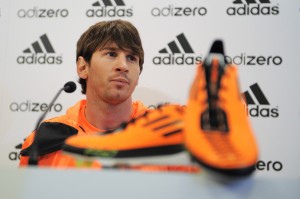 The remaining list: Samuel Eto’o (€23.3 million), Wayne Rooney (€20.6 million), Sergio Augero (€18.8 million), Yaya Toure (€17.6 million), Fernando Torres (€16.7 million), Kaka (€15.5 million) and Philip Lahm (€16.7 million) is a definitive who’s who of world soccer. Added together, the top ten make a staggering €222.9 million yearly, the same amount as the combined annual wage bills of Everton, Newcastle and Fulham! As more and more clubs look to get creative with player salaries to fit in with UEFA Financial fair play rules, adding in bonus payments and merchandise rights to make up for lower wages, players like Cristiano Ronaldo will need to see the bigger picture when it comes to their club valuation of them and realise that sulking won’t get them a bump in their wages.